Ian and Dave
I have been keeping my eye on the UK weather forecast and I have to say I know where I would sooner be.  It would have been a good time to be on your carp fishing holiday in France this week
Apart from the occasional shower we have been basking in sunshine and it has been glorious, my tan is coming on already.
I had 2 of my local customers here for a day on Friday, Ian and Dave, 2 gentlemen of mature years who take every opportunity to fish here when we are not booked up.  They like nothing more than to sit on the bank relaxing and feeding themselves. Bacon butties seem to be the food of choice!  Give them good food and they will hang around for more.
It works for them but they do not seem to apply that simple concept to their fish.  I was trying to explain on Friday that a big carp will eat one handful of corn in one mouthful and then swim on looking for another one.  But, if you give them plenty to find they will hang around and stuff themselves looking for more.  One fish rutting around on the bottom will attract another and another and so on.
The carp in my lake definitely swim around in shoals, and they have mates.  It is always the same fish together when you see them.  It is also true to say that the smaller the carp the bigger the shoal, and conversely, the bigger the carp the smaller the shoal, the really big ones seem to be by themselves.
So, my theory is simple, you have to feed them to find them and then feed them to keep them.  But, and there is always a ‘but’, the food has to be interesting and it has to be good.  Have you ever had one of those bacon butties where the cook has shown the bacon the pan then put one slice of miserable looking bacon between 2 slices of cheap stale white bread and then served it to you cold? Yes? You never go back to that cafe do you?
On the other hand, 3 or 4 slices of well-cooked good quality back bacon served up between two extra thick slices of fresh Mother’s Pride, loads of butter melting on the hot bacon, and a dash of brown sauce.  That has you going back time and time again doesn’t it?  Big carp are exactly the same.
I was busy around the lake all week, the water has warmed up and the fish are everywhere, particularly right up in the very shallow water, between “The Bay” and “Twin Oaks”.  One particular shoal was there every time I walked by, I can recognize it because the leader of the pack is one of my red Koi, a beautiful fish that stands out in a crowd.  An average size shoal of around a dozen 20s.
I finished cutting grass about 5pm on Saturday and declared that I was going fishing. Helen must have been in a good mood because she did not object.  I made a batch of my favourite ground bait mix and off I went to Twin Oaks after one of those 20s.
For Ian and Dave this is my recipe;
4 big handfuls of cooked corn.  The chopped stuff so it is all different sizes and textures. Leave it to cool down with the lid on so it soaks up all of its own juice, it needs to be like a big thick gluppy mess.
1 big handful of cooked bird food, gluppy as above.
1 handful of mixed size pellets.
1 big handful of boilies all crushed up to different sizes, add a few whole ones for good measure. (whatever flavour you are using)
1 handful of salt (yes salt, the more the merrier)
Add ground bait of any type just to soak up all the juices and bind it all together.
Hey presto, the carp love it, it spreads everywhere and keeps them nose down looking for more.  Add it little and often but do not let it run out or the fish will run out also.  There is enough there to last me about an hour, which is good because that is always how long I give myself, 1 hour or 1 fish.
I moved all my kit down to Twin Oaks, baited up, cast out and waited.  My right hand rod was up in the shallows, 20 meters away, two rods out in half a meter of water, about 20-30 meters from where the Red Koi gang hangs out.  20 minutes later and bang, my rod nearly came of the pod and this was the result; 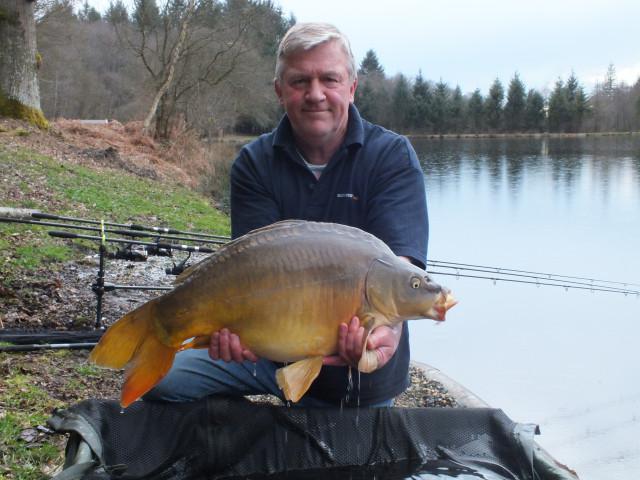 A fantastic looking fish and so strong you would not believe it, 20lb 2oz.  By the time I got him out, weighed and returned, that was my hour up, it was getting dark and starting to shower so it was time to go.  There was also a beer in the fridge with my name on it.