Two good friends of mine were fishing here last year; Simon Mercer and Pete Bexley.  The usual banter ensued over dinner and Pete was having a go at Simon over a 50 pounder he caught on his first cast within minutes of arriving at a swim. ”No better than a Pub Chuck” Pete declared.

I had never heard the term before and Pete went on to explain it thus:

“You come back from the pub after a few sherbets and you really can’t be bothered, so, you cast in with an almost deliberate attempt of not catching so that you can get your head down and ZZZZZZED away the effects of the beer.  Then to everyone’s surprise you are into a fish through pure luck and no skill”.  (He put the emphasis on NO SKILL, Simon!!)

“But you hadn’t been to the pub” I said.  ”It don’t matter” said Pete “it was just a variation on a theme; it was still no better than a Pub Chuck”.

I think I had a bit of a Pub Chuck on Sunday.  I was working on swim number 2 “The Meadow” and I was keeping an eye open for those nuclear submarines I saw last week in Brian’s Bay.  There was a ripple on the water so I could not see the fish but there was enough activity to let me know where they were.  I flicked out a bit of loose feed in what I thought were 3 promising areas, and with the intent of coming back at tea time for an hour off I went to finish the fencing around the small water meadow next to the barn.

Sometime later Helen asked if I was going fishing, I almost said no but remembered that bit of loose feed I had flicked out and thought it would be a waste if I did not go.  Besides I had still got a good hour before dinner and therefore time for my usual 1 hour or 1 fish session.

I made up a flask of coffee, grabbed the boys and off we went.  I had 3 rods all set up and waiting for me, all I had to do was bait them and cast them out to where I had put the loose feed earlier that afternoon.

My first cast was a disaster; I must have had a loop of line caught around the reel from a previous cast.  My target area was about 50 meters away and as the lead was flying through the air toward my target it stopped dead in mid-flight, I thought it was going to come straight back at me but it didn’t, instead it flicked off to the left and landed in the margin 10 meters to my left where I had moored the row-boat.  The water there is only 300-400 mm deep so I left it where it was with the intent of sorting it out later.

I cast out my other 2 rods with more success and then sorted out the line around the reel on my first rod.  I left the rig where it was in the margin, put the rod on the pod with the other 2 and settled down with a cup of coffee.

As I contemplated the meaning of life, enjoying my coffee, to my surprise the baitrunner on my first rod screamed and my line was bailing out, I dropped my coffee in shock, grabbed the rod and was into this beautiful mirror 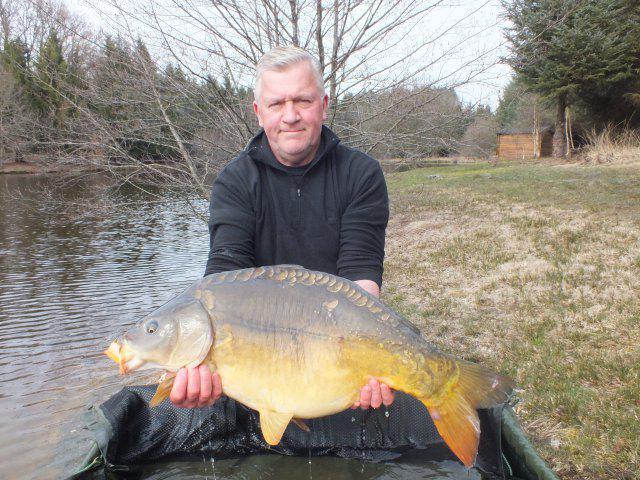 A 31lb 9oz mirror, hooked in 10 minutes, with no pre-baiting, caught in a margin swim not much more than 1 foot deep, after the most disastrous cast ever.  A Pub Chuck or what?  I’ll let you decide.

Simon is coming back in May, this time with his good lady Donna; let’s see if you can top that.